Our next meeting will be on October 4th 2022 at 6.30pm, probably on Zoom as hybrid sessions are proving complex to set up.   Please email to oonforum@gmail.com to join our mailing/membership list.

You are welcome to join if you live or work in (or near) the area of north-west London for which the Old Oak and Park Royal Development Corporation has been the local planning authority since 2015.  Membership of the Forum is free and open to all.

Our Forum continues to campaign against the very high-density/high rise development which is being inflicted on North Acton, East Acton, and North Hammersmith.

Following the decision of the OPDC Board at its meeting on June 22nd 2022 to adopt the final version of the OPDC Local Plan, OPDC planners are now preparing a Supplementary Planning Document for the newly defined area of ‘Old Oak West’.   Our neighbourhood area lies at the heart of this (although OPDC prefers not to show our boundary on its maps and slides).

Adoption of the Local Plan has been five years later than the originally scheduled date of Spring 2017.  We are far from happy with the end product, and will continue to argue that it lacks spatial coherence and transport connectivity across Old Oak.

We also contest OPDC’s approach of continuing to grant planning consent to high-density residential towers prior to securing adequate Government funding for the necessary infrastructure – whether this be public transport or health and education facilities.  This is cart before horse.

Two major planning applications which we have been tracking remain undecided (One Portal Way, North Acton and a proposed development by Pocket Living at Atlas Wharf — see the previous posts in the right hand column).    These applications have been with OPDC since before Christmas 2021.  We understand that fire safety issues is one of the reasons behind the delayed decisions, and we have no problems with further delays.

It is not too late to submit an objection to the mega-application at One Portal Way.  OPDC are legally required to take all representations into account until the date of decision.  See our campaign website at www.imperialfolly.org.uk for more background.

The image below is what the increasingly notorious ‘North Acton Cluster’ will look like if this development is built, along with other towers that already constructed or have planning consent. 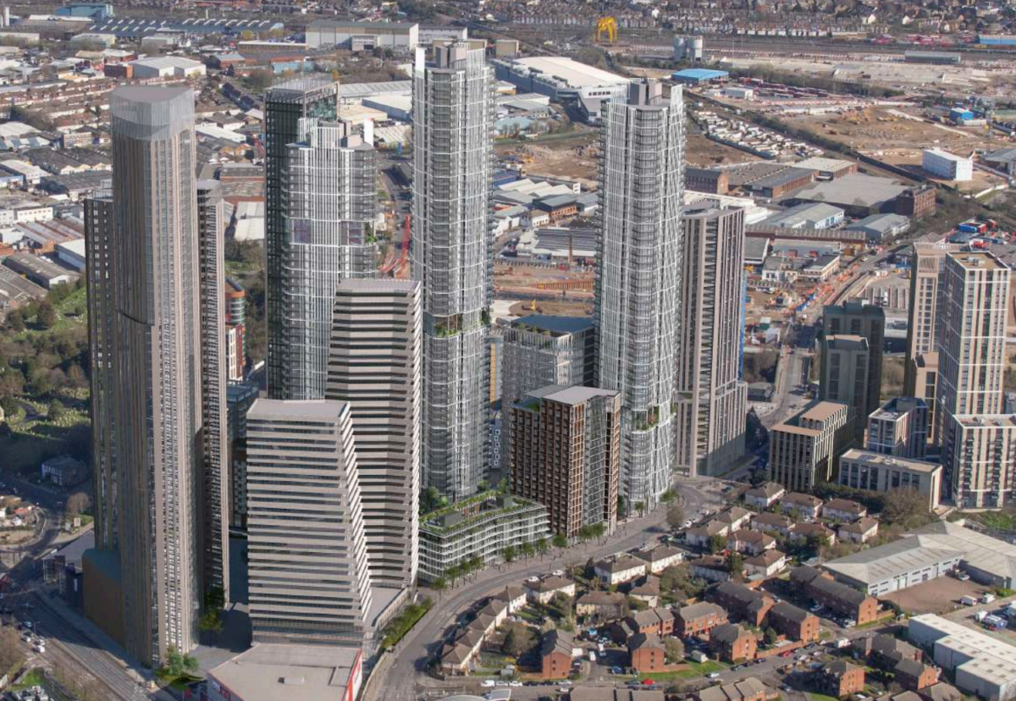 Objections and/or comments can be emailed to planningapplications@opdc.london.gov.uk.  Please include the reference 21/0181/OUTOPDC and your name and address (which will be redacted before comments appear on the OPDC online planning register).

Further background to the Forum

Old Oak is a part of west London lying at the heart of the UK’s largest urban regeneration project.  It is the location of the  HS2/Queen Elizabeth Line rail interchange at Old Oak Common station, on which construction started in 2020.  Completion and opening of the station is due some time between 2029 and 2033.

Since April 2015 the Old Oak and Park Royal Development Corporation (OPDC) has been the planning authority for 650 hectares lying within the London Boroughs of Ealing, Brent, and Hammersmith & Fulham.   The OPDC is accountable to an  appointed board, and ultimately to the Mayor of London.

Because of its future connectivity to the national rail system, Old Oak has been earmarked for many years as one of London’s major ‘opportunity areas’.   The rail interchange is seen as a ‘catalyst’ for high density commercial and residential development.

Back in 2015, a target of 24,000 new homes at Old Oak was set in the revised London Plan.  This target stays the same in the 2021 London Plan.   Yet during 2020-2022, London’s patterns of travel and working  changed significantly during the pandemic.

Much of Old Oak has remained as industrial and railway land, bisected by the Grand Union Canal.   In 2015 a group of local residents associations in the area came together as an ‘interim’ neighbourhood forum.  Our original aim was to achieve designation of a 280 hectare Old Oak neighbourhood area, and to prepare a neighbourhood plan which would help to integrate the existing residential settlements within and around the edge of the OPDC boundary.

After many months of discussion with the Corporation and with Hammersmith & Fulham Council, both these planning authorities rejected the boundary we had proposed (shown in blue on the map below).  In September 2017, the OPDC designated a much reduced 22 hectare are in East Acton (see green boundary below).  Hammersmith and Fulham Council designated a separate (but nearby) boundary as the old Oak Estate neighbourhood area (see brown boundary below).

Details of the reasons for these decisions, as published by each authority, can be found here and here.  Following a further designation application, the Old Oak Neighbourhood Forum was designated in February 2018.  This body has the legal powers to prepare a neighbourhood plan for the 22 hectare area that includes the Wesley Estate, the Island site (TITRA railway cottages), Midland Terrace/Shaftesbury Gardens and Wells House Road. 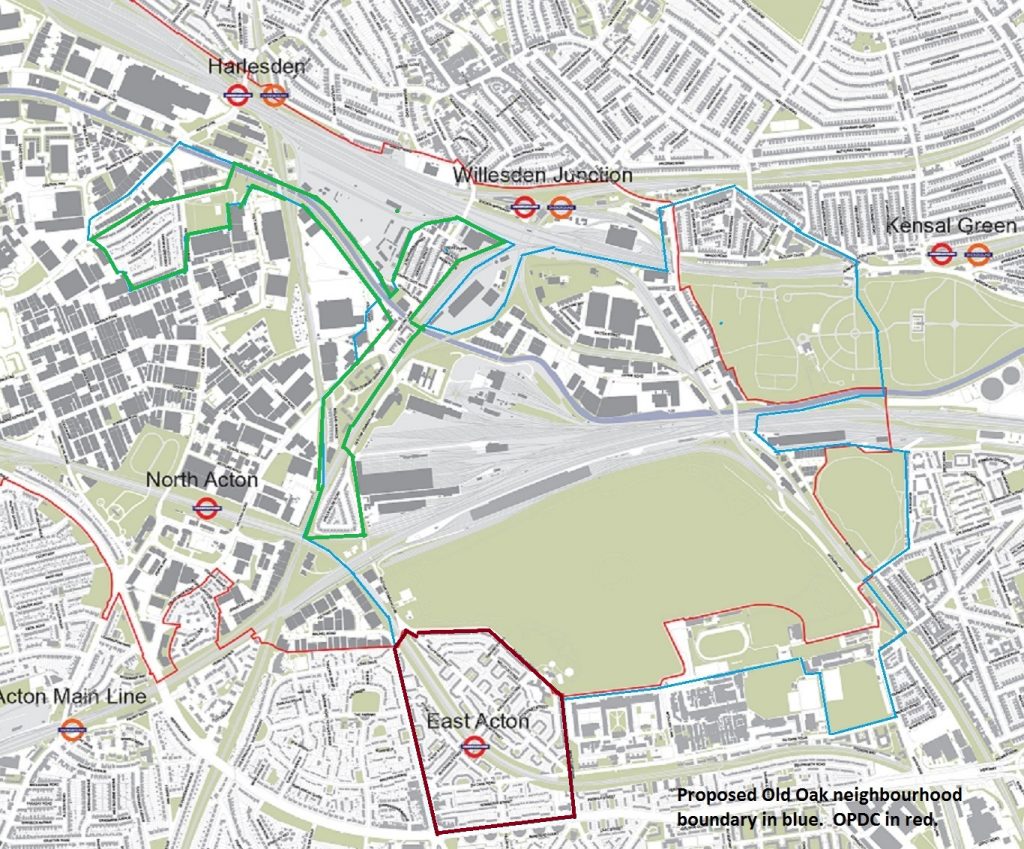 No organisation has yet come forward to apply for designation as an Old Oak Estate Neighbourhood Forum, in Hammersmith & Fulham.  This area remains one of two ‘orphan’ neighbourhood areas in the Borough.

Please get in touch by emailing oonforum@gmail.com if you wish to join the Forum as a full member or an ‘affiliated member.’  There is no membership fee to join.

Other pages on this website give more details of who we are and the story so far.  These include a second draft of our neighbourhood plan (2020 version).